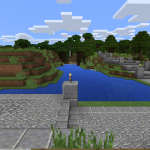 Type: Infinite
Game mode: “Creative.” This was originally a Survival mode game. I switched modes using iExplorer and as a result the game mode is a little messed up; I can get the unlimited inventory but I can’t fly and things can still hurt/kill me. Also I can’t seem the switch back. Hoping the promised game mode switch in the next update will fix it.
Seed: 19781007
Date created: July 18, 2014
World size: 129.2MB

This is the world I’ve been playing/building in since 0.9.0 was released. Most of my posts will be about this world.

This is Fisher Price® My First Minecraft World™, crafted between May – July 2014. 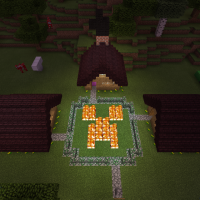