I am pleased to report that for the most part the new server is working well. We are having a few issues, but they are mostly of the PEBTAC* and “my network is being dodgy” variety. The latter problem is nothing new as they are the identical problems I’ve been having on the iphone since 0.12 was released.

The other errors are not the fault of the tablet, they are more the fault of this is Fisher Price My First Android Device and there are some things I’m still getting used to. So far the major impact here was finding out the hard way that my backup procedure needs to change, as I thought I’d backed up the game before we went to Survival mode last night, and then went to restore it and got “ARBTServer cannot be opened.” Panic. I ended up transferring the files I’d pulled off my iphone early Saturday, so two days of server time went poof, but two days is way better than a year and a half worth of work, right? :/ I did figure out what I was doing wrong this morning so that won’t happen again.

Other news and announcements etc: 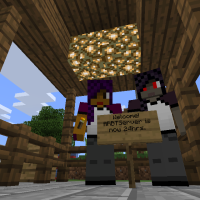 Been a little quiet on the website lately! For that I apologize – my non-Minecraft life has been eating me alive, and many of the ARBiTors are back in school, so really everyone’s been busy. But I wanted to delurk long enough to say HEY I HAVE SOME BIG NEWS OH WAIT THE FEATURED IMAGE FOR THIS POST AND THE SIDEBAR ALREADY SPOILED IT WELLP. To make a short story long, October 7th was my birthday, and I got myself and by extension the rest of the gang a little present: An Acer Iconia One 7, the sole planned use … END_OF_DOCUMENT_TOKEN_TO_BE_REPLACED

First of all as your fearless leader I apologize for my absence these past few weeks. August has been absolutely crazy with work and Real Life, so my focus has been anywhere and on anything aside from Minecraft lately. I’m hoping things will calm down this month so I can focus on the game and the blog more.

Second of all, its a long weekend in the US owing to the Labor Day holiday, signalling the bittersweet end of summer for most of us. Since WSE is down for the moment, I’m offering to keep ARBTserver online as much as possible this weekend, since I have no official plans that require leaving the house, lol. Since this will essentially be 24 hours for the next couple days, I invite people who have wanted to visit the server but couldn’t before now due to time zone problems to pop on and say hi. 🙂 Throw down some nether portals, since 0.12 has been submitted and will hit fairly soon! (I’ve been setting off a bunch of farewell nether reactors.) I won’t necessarily be at my screen the entire time, but will say hello if I’m around.

Hope to see y’all around! 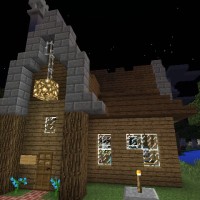 August is drawing to a close and comes with several new faces from WSE, a blip with the website domain, and many amazing builds being built or just getting started on. Today I would like to highlight, a cottage near spawn. The cottage was built by BatMan3054 and the farm was built by Swarmhut. I like the use of bricks as part of the path material, because it really pops against the green of the surrounding grass. I admire how the windows of the building are irregular and somewhat mismatch. The windows of the house make it feel quirky. Stepping … END_OF_DOCUMENT_TOKEN_TO_BE_REPLACED

So things have been a little slow around ARBTland, mostly because I haven’t been online much in the past few weeks. (Stupid real life.) That said, over the past couple of weeks there have been a few changes of note.

First of all we got another visitor from WSE – Rudie! Always glad for the cross pollination between the two servers.

In terms of build news, the monument behind spawn keeps on expanding as new people come in. Rate we’re going that things going to extend into the sea. In addition to adding Rudie, FatalDeath and Billybob decided to silly up their statues by giving them tongues.

FatalDeath has been working on a wizard tower, and Rudie has also been building a very fairy-appropriate home in a large artificially created stump.

I’ve been busy too. Started working on a new skyscraper not far from Wacker Tower, loosely based on a building from SimCity BuildIt, which I’ve been also playing some on the side.

Lastly 5 has been working on a secret project under the Rainbow Balloon. Did I post pictures of that since I refinished it?

One thing I’ve been irked by since a few game updates ago – when they changed all the lighting, the ocean lost its translucency. It’s now REALLY hard to see underwater, which is a pain if you’re building something really deep under, and impossible if you’re trying to take pictures of said something, so the best I can do is sorta present a vague blob under the water taken from the surface.

In server improvement news, I’ve been waffling on transferring the game to an external server for a bit, weighing pros and cons of each platform. I’ve all but decided that I want to move the game to Pocketmine, as I have some experience with running it and it offers the most flexibility and customizability right now. But on the downside, it’s lagtastic, and mobs don’t work yet, which is a bummer; I like having random creatures roaming the world. It gives what can often be a lonely game a little bit of life. I supppose I could treat the missing mobs as a temporary problem, as the goal of PM will be to eventually replicate the full experience of the game, and its main programmer now works for Minecraft proper. The other major problem is that transferring/ MCPE worlds to PM is still an ordeal thanks to the leveldb storage format being a pain in the butt to work with/translate. I and others have put so much time and love and work into this world, so its pretty important that we continue to be able to play with it.