Hey ARBiTors! The blog’s been kinda neglected lately, I apologize. Too many irons in the fire lately, and too intimidating of a backlog of server pictures and posts to do. A quick update before I get to the big news. We’ve been 24 hours for a little less than a month! Well, I say 24 hours, lol. I will admit the time has certainly had its share of wonkyness between my internet doing its best impression of a yo-yo and the occasional crash. For the most part though, the happy little tablet has played happy host to the world and … END_OF_DOCUMENT_TOKEN_TO_BE_REPLACED 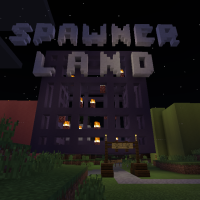 A fairly low key evening was had tonight, with a concentration on finishing up builds people had started earlier. 5 and Swarm finished the minigame arena they’ve been working on. There is spleef, archery, King of the hill, fishing and parkour to compete in. May the best person win! Henry10030 meanwhile finished up his base and topped it off with a giant statue of themselves. Obviously so we don’t forget what they look like, lol. Hachi has been working on… well, I still haven’t figured out what this is supposed to be. I just know that it is awesome. To … END_OF_DOCUMENT_TOKEN_TO_BE_REPLACED 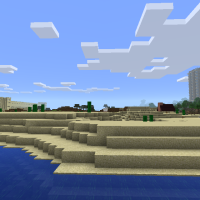 Just for laughs last week I took a long wander towards the north on the road with the GUI off taking snapshots of interesting things along the way.

END_OF_DOCUMENT_TOKEN_TO_BE_REPLACED

Most of this weekend’s build work included laying a ~1115 block segment of road running from a brick house* I’d mostly finished a few weeks ago (just had to add the roof) to the mostly unexplored northwestern shoreline. This was slightly more of a pain in the neck than usual (literally at some points throughout Sunday even) because after last Monday’s server session I’d left my game set on survival for Reasons.** After having my game mostly creative for the past little while, I’d kinda forgotten how arduous building a Large Thing in Survival mode is, even if you’re using … END_OF_DOCUMENT_TOKEN_TO_BE_REPLACED 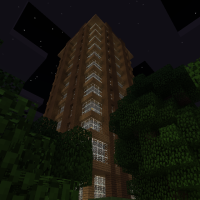 I mentioned I liked browsing Brutalism tumblrs and other images for inspiration for Minecraft builds. One day I happened across a pictures of  the Blue Cross Blue Shield building in Chicago, IL. The building still stands, although it’s been given a bit of a facelift and the more generic moniker of “55 West Wacker.” (It nevertheless has made several “Chicago’s ugliest buildings” lists, which seems a little unfair – I’ve seen way uglier examples of Brutalism.) It also now has very tall neighbors on all sides but the front, rendering all those pretty windows useless and making the building itself … END_OF_DOCUMENT_TOKEN_TO_BE_REPLACED