Subtitle of this post being “Why I Haven’t Been Around Much Lately.” Aside from, you know, day job and adulthood eating my life lately.

I’ve been working on a Minecraft Related but not On Minecraft project which has cut into my playing time some (although I have started a new build – more on that in a later post). Well, a lot. Okay, aside from last week’s server run I haven’t been on MCPE much at all. At the beginning of last month I was still casting about for a present for Wee Beastie’s birthday, and as is my wont, came up with a super overambitious project – a quilt. Not just any quilt though – a quilt that when finished would be an isometric view of a TNT block, since that is Wee Beastie’s favorite block in the game.* The unfortunate thing is I came up with this project a week before kiddo’s birthday, and well. I’m still working on it, because if my build in the game itself are anything to go by, I don’t do things by halves. Overambitious might be a nice way of putting it – I mathed it out on paper and painstakingly cut 768 precisely measured rhombuses out of eleven colors of cotton and am in the process of hand stitching all these pieces (did I mention 768 of them!?) together. Which has been a learning experience to say the least, because by the way? This is the first time I’ve ever made a quilt. Most people start with big squares and do it with a sewing machine. Not me apparently. But it’s okay because while it’s been slow going? Its coming out AWESOME. I mean… well, look at this. 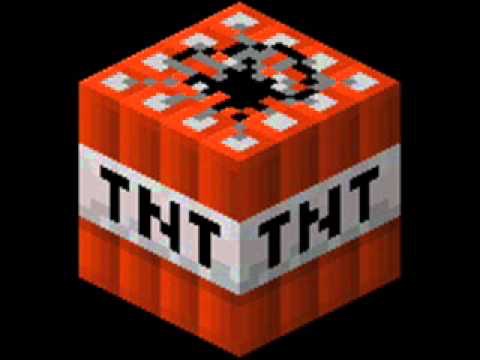 What I’m more or less aiming for.

well, without the shadow on the right face anyway. 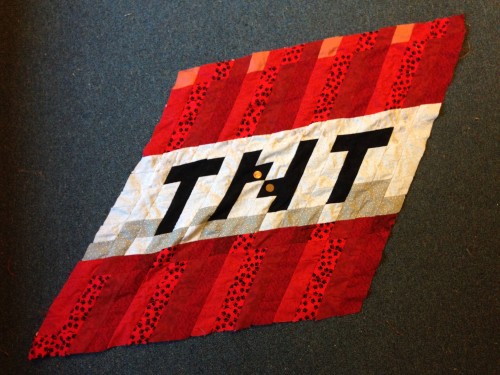 I’m actually almost halfway through the mirror panel on the the other side now. Now that I’m not figuring out things as I go along (and as a result constantly ripping out and resewing mistakes), things are going a lot more efficiently and faster, so I’m aiming to have the quilty bit done by Labor day weekend.

Anyway some more pictures. Both because I love showing off but also because I’m feeling a little guilty about neglecting the game itself and this is doing wonders for my conscience, lol. 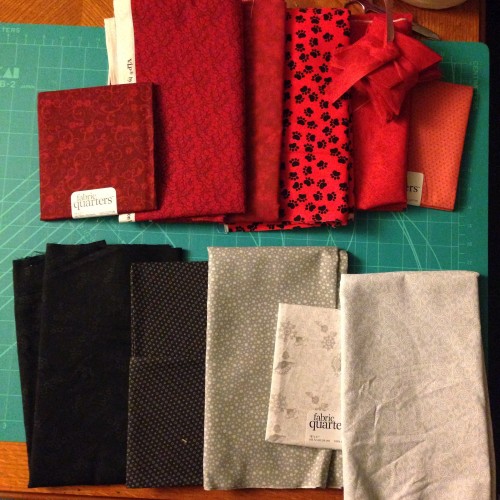 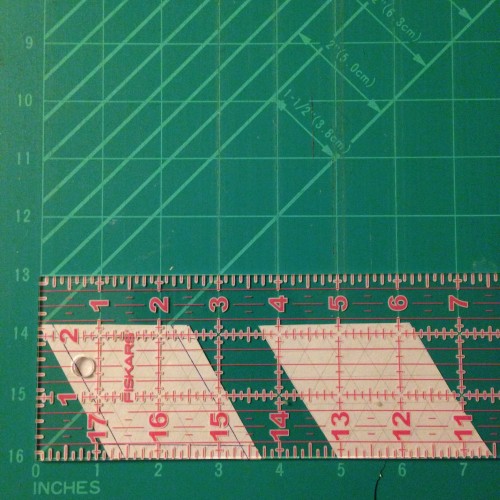 Taped a paper rhombus to my ruler before cutting. 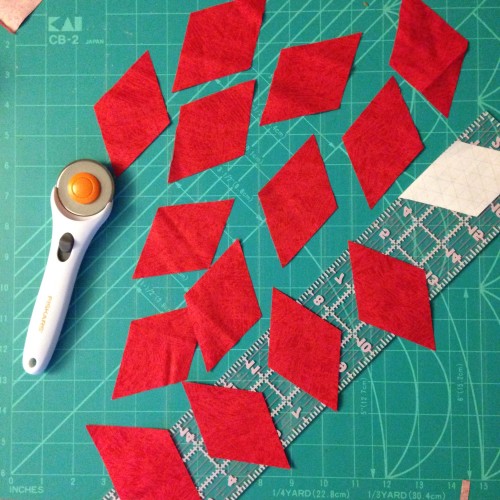 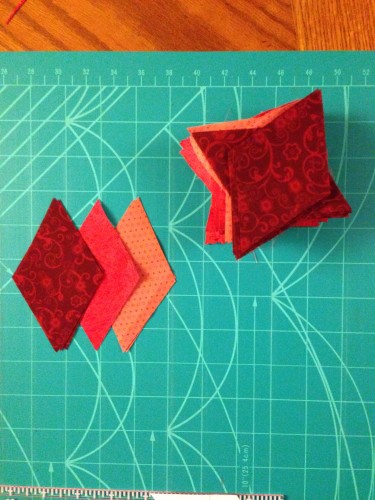 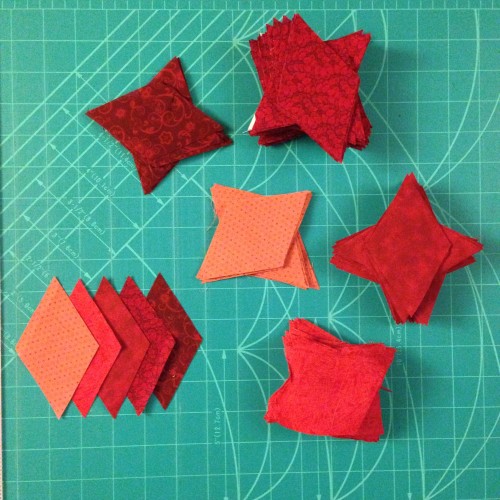 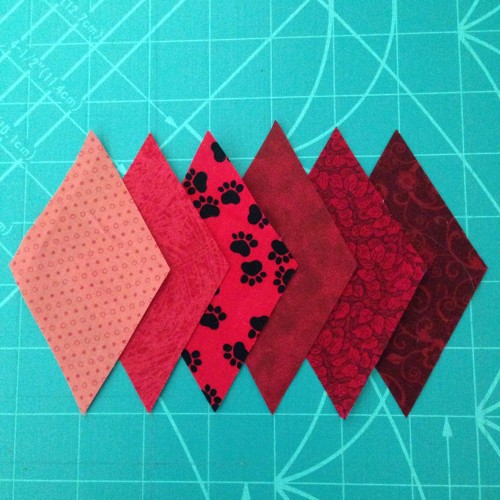 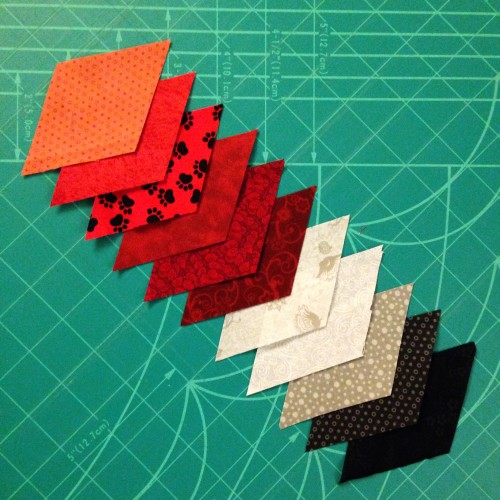 All my colors cut! 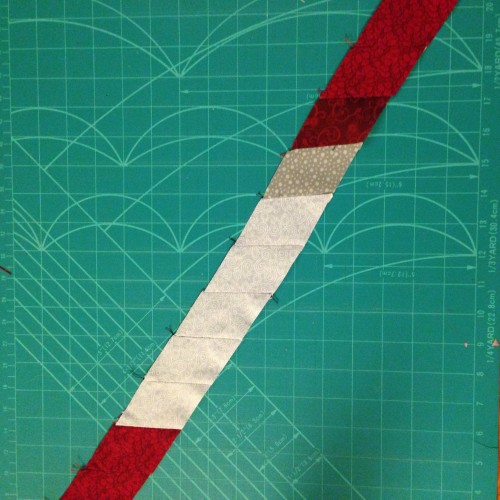 First strip completed. (And upside down.) 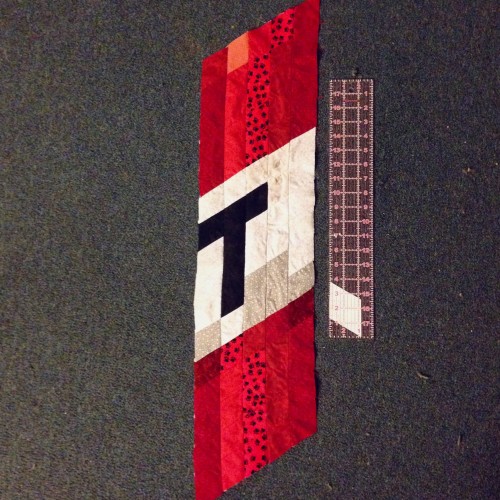 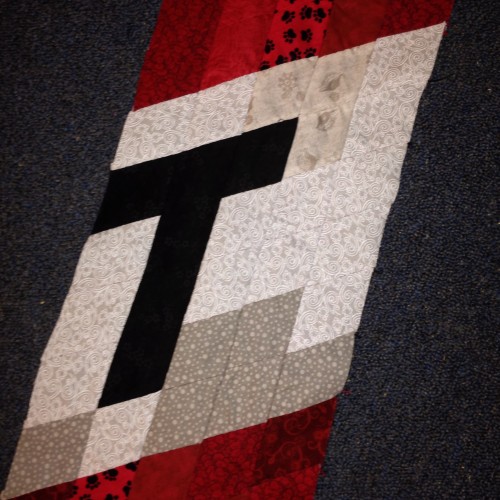 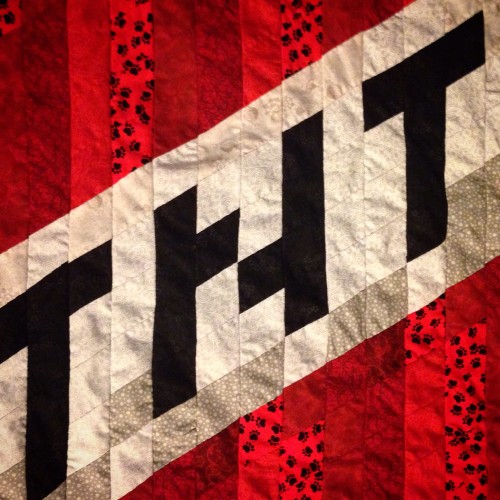 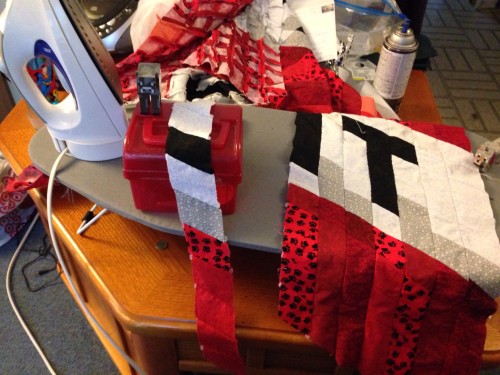 Honestly my workspace is the living room couch. with both the sewing and my laptop in my lap. Or on run nights, with my phone as well. One of the reasons why I’m hand sewing is portability, honestly. Much as I love Pocket edition for its portability (having it always in my pocket being both a blessing and a curse), if I am hand sewing this, I can pretty much take the project anywhere. Hence the little red box in the above picture. (The cow and wolf are just sitting on the ironing board for laughs.)

but yeah. Piece by piece over and over… 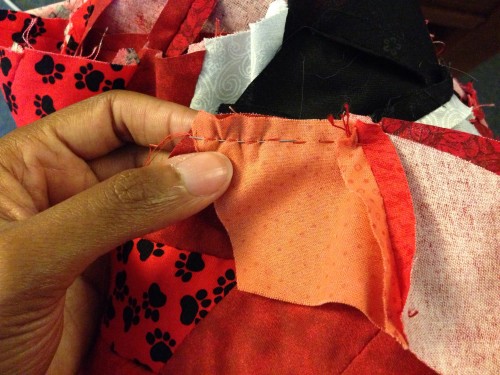 I’ve only stabbed myself three or four times so far, no biggie.

I did nearly slice off the tip of my finger with the rotary cutter tho. Make no mistake, though they may look like glorified pizza cutters, those are sharp.

So yes. This is why I’ve been rather absent lately. A major reason, anyway. The rest is just adulthood eating me alive, but hopefully that’ll also calm down about the same time I wrap this up. Of course, I did say I was going to make Kidzilla an obsidian one after this. And in the unlikely event that I’m not utterly burnt out, I do want to make myself one also. A crafting table, of course.