[EDIT: it is no longer possible to access your app files in iOS 8.3, so the below only applies to iOS 8.2 and below. If you think you’re going to be mode switching a lot between now and 0.11.0 hold off on updating your device.

Yes, I found this out the hard way, and boy howdy I am annoyed.]

During Saturday’s open server run I was asked how I switched between creative and survival with my world, so I thought I’d post a tutorial. While I’m sure some out there will use it to “cheat” (though how you cheat in a sandbox game with no real rules… never mind), for those of us that like to build complicated dungeons or large scale builds, just want to see how the game behaves in both modes, or primarily want to work in one single world (this would be me), having the option to switch is awesome.

Note: A native MCPE game mode switch has been confirmed as being a feature in the 0.11.0 update, so whenever that drops (it’s rumored to be soon), all of this will be obsolete (and hopefully less glitchy).

This is for iOS. You do NOT need to jailbreak your device, but you will need some way of downloading your device files from your PC. (I apologize, I am not sure what you’d need to do this on a Mac/Unix.) I use iExplorer, but there are other utilities that will let you do this (iFunbox is one that’s tossed around Reddit a lot.) iExplorer is not a free program, but this can be accomplished just fine in the Demo mode.

You will also need a hex editor. There are quite a few free ones out there; the one shown is HHD Hex Editor Neo.

Important! Be sure you double-tap the Home button and exit out of MCPE COMPLETELY before tinkering with the world files, otherwise you may corrupt your game!

Shut down iExplore (or whatever you’re using), unplug your iThing and fire up MCPE. If you did everything correctly, your game should be listed with the opposite game mode. If not, just rename your backup copy to level.dat and reupload that; it should fix it. From there you can try again.

This is not a complete game mode switch. Some aspects of your world’s original configuration will remain. If your world was originally a Survival one, you will notice that while you have unlimited inventory, you will not be able to fly, mobs, falls and drowning will still hurt/kill you but you won’t have a health bar, and items like flint & steel and swords will have durability bars/damage. If you start in Creative and switch to Survival, you’ll retain your invulnerability and flying, but you won’t be able to use chests or crafting tables. Also, aside from an initial “???” glance in your direction, mobs pretty much treat you like you aren’t there unless you attack them. Sometimes this makes for hilarious screenshots. 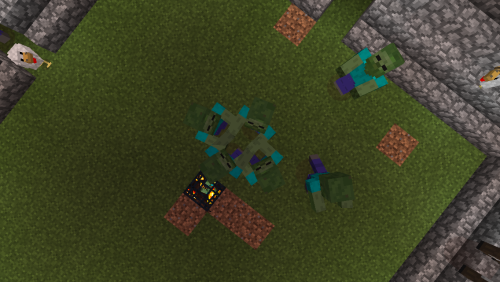 This all only applies to the host player. Guests in multiplayer will experience Survival/Creative normally, which can prove frustrating if you’re hosting a Creative game with a small griefer. (What? No, I’m not speaking from experience, whatever gave you that idea? >_<) On the other hand if you have more than one device, it does mean you can get around the flying problem by leaving your game on the host device and building with the other.