Well now that the app has survived a few multiplayer sessions, time to post an official review!

Plug for Minecraft PE (or PlugPE) is an iOS app that brings usable commands to the gameplay experience, making it possible to run a moderated server-like environment for players. While not all of the commands in the arsenal are functional yet, most others Minecraft and MCPE players are familiar with (kill, teleport, coords, give, etc) do work. They are still working on “fly,” “ignite,” “gamemode” (though that’ll be a moot point come 0.11.0) and a few other things, including, apparently “protect,” which YAY.

I was ecstatic to find this app – it is near impossible to find working mod-things for iOS since the Apple ban on changing items within other app directories hampers any kind of mod development for the platform. (One of the reasons I am eventually looking to host these sorts of games on an android device.) My main source of “oh yes, finally” was access to coordinates, since I have at present no other way of generating any kind of world map or having the foggiest idea where I am when wandering (other than an idea of what direction I’m pointing). Having checkpoints to bounce between also makes navigating the sprawl somewhat easier when shuffling between works in progress, especially since due to my slightly messed up world tinkering my world is in creative mode but I myself am stuck in “survival” – I can’t fly and even though I have the creative UI (no healthbars) I can still be hurt/killed. (Yay, autoheal!) It introduces a little bit of lag to the gameplay, but still works well. You can also set up tiers of permissions through the app for your players so it’s not an autokill free for all. (Very important with my usual two players!)

There are very few cons, and many of them are not directly the fault of PlugPE. Much like all Minecraft/MCPE things, be they mods or the actual games themselves, using this app does uncover a few bugs. Some of them seem to be related to the available RAM on your device, like the occasional tendency to crash the entire game after teleporting significant distances and then immediately attempting to do things like place signs or open doors. Moral of story, if you’re doing multiplayer on an infinite world, don’t host your game on an iPad 1. (I doubt it would work anyway, the app description says it’s only for iOS 6+.) I have a feeling some of my crash problems would go away if I knocked my view distance back down to normal parameters (I’ve options.txted it out to about 255 blocks on an iPhone 5). Also the keyboard interface for MCPE in general is clunky and hard to use, which can become very frustrating if you’re trying to squeeze off a command quickly. I’d say if you’re hosting/moderating a game, find somewhere safe to be, turn on auto-heal and invisibility just in case, and just leave your chat window up. You won’t really be playing much, but your players’ll be having fun. There’s also a bit of a limitation in scope – having the set of commands available is a fantastic improvement from no commands at all, but once you use them for a while you start hurting for the ability to customize. Just having the ability for a custom welcome/server rules message to go out to players instead of the PlugPE “please post an app review!” would be really helpful. I’d also like an ability to set boundaries for multiplayer games, disallowing players to wander farther than [range of coordinates]. Might cut down on those crash-after-teleports. I suppose that could be handled by only hosting games in the old 256×256 configurations, but where’s the fun in that? :/

Overall though, this was a worthy addition to my game. Having access to coordinates alone is going to be MASSIVELY helpful when planning subway additions and future builds, plus having the satisfaction of being able to lock/kick/ban people for griefing (seriously people, not on my game, there’s a whole rest of the internet for that) is rather priceless.

And speaking of price, some notes:

This is NOT a free app, it’s $1.99. Considering what it’s adding to the gameplay experience though, I consider the price of a soda + some change well worth it.

The app comes with the ability to host multiplayer games to other devices via Bluetooth if a wi-fi connection is unavailable (all players have to have PlugPE running though). I have not yet tested this feature, but may try it in the car sometime. (Obviously not while driving.) It also has a list of available external servers to join, though again, I have not really explored that feature either.

The app also has a pretty comprehensive help doc built into it as well as a handy list of item names/codes for the give command. problem is there’s no real good way of accessing this list while playing as switching apps kills your game. Help at least can be accessed in game via ? or typing a command to see what it does, but unless you’re the sort that has all the items and codes memorized (there have got to be a few of you out there) you’re kind of out of luck. I’d suggest keeping the Minecraft Wiki data values page open on another device/computer while playing instead if you are going to need that list.

This app requires “Local Server Multiplayer” to be on, even if you’re soloing. As far as I can tell, Plug PE joins your game and works like a command bot – it shows up in your player listing as a blank space. I am not sure why, but it also seems to use your music/video player interface for some reason, so make sure to shut it off after you’re done. It took me a little while to figure out why my alarms/ringtones were only sounding briefly/once. 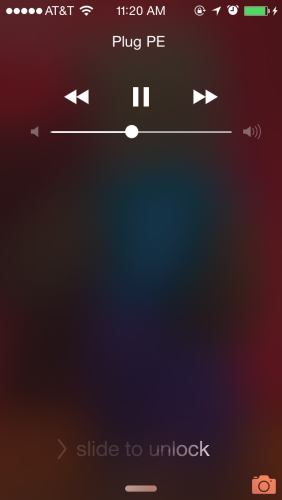 Yeah, I have no idea.

Also while its generally a good idea to play MCPE while your device is plugged in, I would definitely insist on plugging in if you’re running both PlugPE and MCPE, especially if hosting over Bluetooth.